The Olympic Winter Games has come to an end following a spectacular closing ceremony at the Bird’s Nest stadium in Beijing. the Olympic flame was ceremonially extinguished and fireworks sparkled overhead to form the shape of the Olympic Rings.

Over the past 16 days, the world has watched the greatest winter athletes compete against each other for the highest honors, but as they took their place among the parade of nations a giant augmented reality ‘Chinese knot’ filled the stadium to symbolize the Olympic spirit of togetherness.

On the evening of February 4, 2022, the opening ceremony of the Beijing Winter Olympics was successfully held. In this Spring Festival, an unparalleled visual feast was presented to the people of the world.

In the past, such a large-area full-stadium display usually used an engineering projection scheme. However, with the development of China’s LED display industry, which is the highest level in the world, this opening ceremony boldly used full LED solutions, including 11600㎡ LED floor tile display + 1200㎡ ice waterfall + 600㎡ ice cubes + 143㎡ Olympic five The ring + 1000 square meters of the bird’s nest stands on both sides of the large LED screens, forming the world’s largest high-definition LED three-dimensional stage, fully reflecting the “digital technology + aesthetic innovation” visual label of the opening ceremony of the Beijing Winter Olympics.

It can be said that the opening ceremony of the Winter Olympics is a breakthrough and victory for the entire LED display industry. The Chinese used their own large 3D LED display screens to present an unparalleled audio-visual feast to the world.

The ice waterfall screen of a total area of 1200 square meters is seamlessly spliced with thousands of square meters of LED floor tiles on the main stage.

8K Ultra HD terrestrial display panels across the stadium to provide the utmost viewing light show experience for the audience in the stadium and for viewers at home. With the blooming dandelion amidst the night sky, the flowing waterfall amidst the white snow, the light show opening ceremony was a success as it managed to provide a realistic, dynamic and immersive experience for everyone watching. 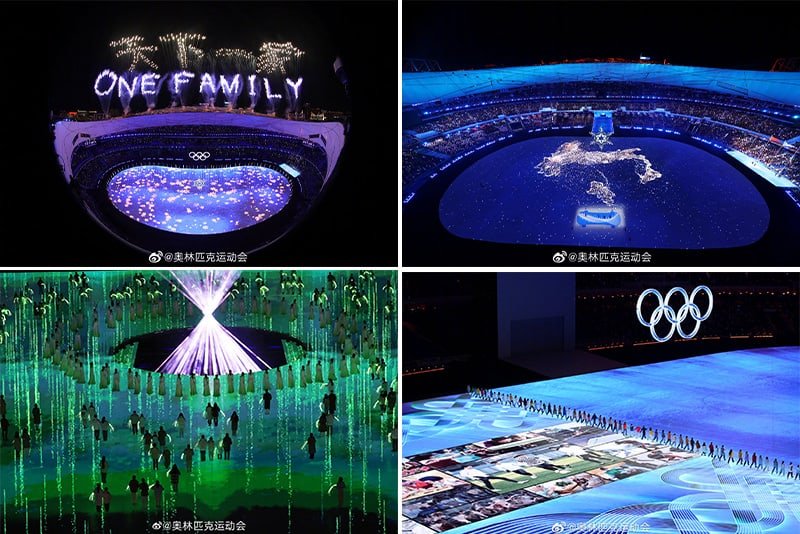 To build such a big LED screen on the ground of the stadium was not an easy task. Since it also served as the main stage, on which the entire performance and the Parade of Nations took place, it had to be wear-resistant, water-proof, electrically safe and able to sustain heavyweights. What was more challenging, as the stadium is open-air, the ground screen had to be able to withstand the freezing temperature of Beijing’s winter, as well as weather like rain and snow.

The giant LED snowflake is at the center of the stadium. 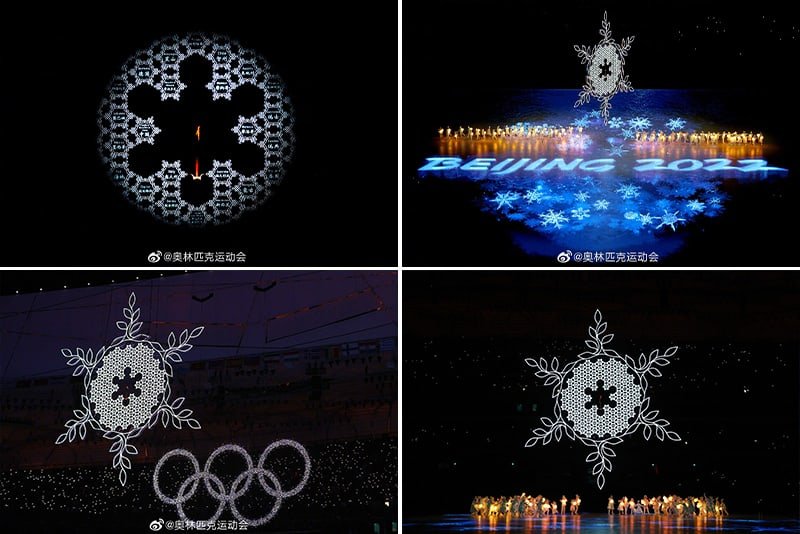 The last finale of the opening ceremony is to light up the torch part. The main torch platform has a diameter of 14.89 meters and is composed of 96 small snowflakes and 6 olive branch-shaped LED double-sided screens. There are more than 10,000 LED lamp beads, each of which is independently controlled by a single channel of the driver chip. In order to realize the creative idea that the torch stage of the director group should be “sparkling like a diamond”, through more than 500 design drawings and nearly 10 rounds of sample preparation, we have developed a single-pixel controllable special-shaped display product with the narrowest luminous surface in the industry. It fully presents the line sense of snowflakes and the delicate picture display effect, and successfully turns the artistic creativity of the director team into reality. 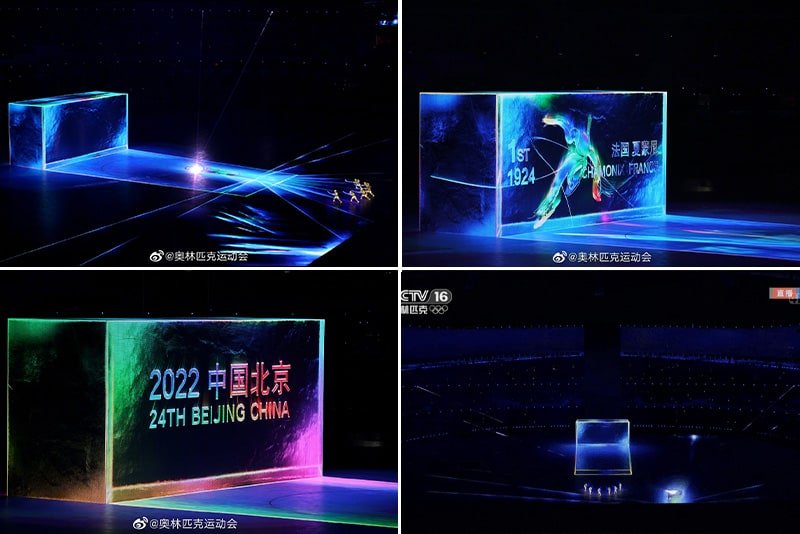 The water condensed into ice in the air, and a huge ice cube rose from the ground. The water ripples are looming, and this 600-square-meter ice screen slowly rises, containing the spiritual core of the East. The naked-eye 3D visual effect on the ice cube provides the audience with a realistic visual experience.

The five rings of ice and snow are 19 meters long, 8.75 meters high, 143 square meters in area, 3.2 tons in weight, and only 35 cm in thickness. The interior is composed of a 360° LED special-shaped screen without dead ends, which can display any screen. To leave the maximum creative space for the director team of the opening ceremony, the outermost diffuser plate has made a “beauty” for the display screen to ensure the visual effect is clear and soft. Steady rise to 13 meters in 43 seconds, showing the world a super dazzling Winter Olympic Rings!

How were the five rings “carved”? The ice-breaking performances that you have seen are actually mainly naked-eye 3D effects completed by visual effects. 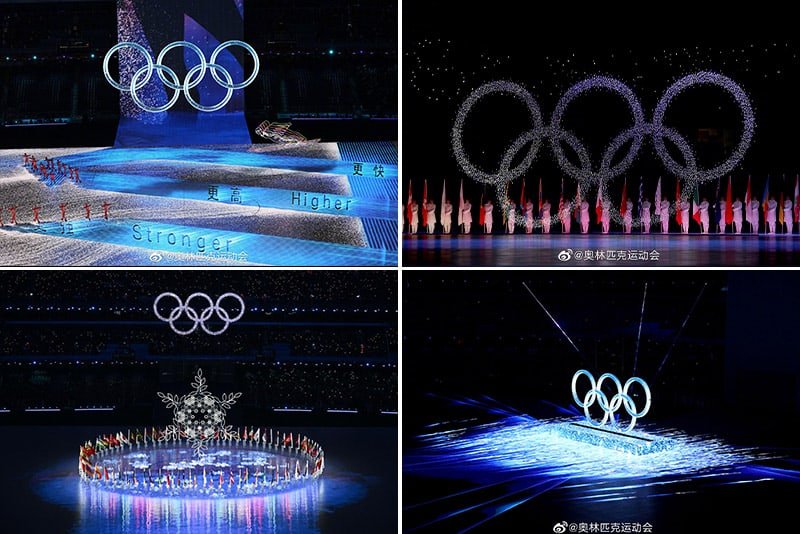 In fact, the Ice Cube is a 3D LED Screen 10 meters high, 8 meters deep, and 22 meters wide. The crushed ice and hockey pucks in the Ice Cube are displayed by technicians using light, shadow, and digital images.

Image capture, On-site industrial cameras can capture images with very low latency. The camera is connected to the computer room through optical fiber. The computer room with artificial intelligence and vision processing functions can remotely control the activation and focusing of the camera.

Image Processing, Behind each camera, is a server. The camera’s signal is connected to a main and a standby server system through optical fiber, and they process the signal just captured by the camera. The server processes, identify the coordinates of each child on the field and extracts them accurately. This is a signal that computer vision and artificial intelligence process later. This process transmits the coordinates of the physical world to the digital world, and the rendering server will render beautiful patterns under each child’s feet according to the coordinates of the digital world.

Real-time rendering, Live effects are generated in full real-time. This rendering system is called AI real-time special effects system. It first obtains real-time data from an artificial intelligence-based motion capture system. Then, these data transmit to our real-time rendering system, which will render the corresponding effect according to its position, and finally get the video picture effect, and then give it to the LED control system, and the LED control system will finally present the effect to the ground screen.

The presentation of the opening and closing ceremony of the Winter Olympics has achieved the perfect combination of digital technology and aesthetic innovation. In cooperation with 4K, 5G, VR/XR, AI, naked-eye 3D, holography, and other technologies, combined with special-shaped, transparent, and other screen designs and Incredible led lighting.