The Difference between DIP and SMD LED screen

What is DIP technology?

Dual in-line package is an electronic component package with a rectangular housing and two parallel rows of electrical connecting pins. The package is through-hole mounted to a printed circuit board (PCB) or inserted in a socket. DIP screens have a separate LED (R, G, B) for each of the three main colors: Red, Green, and Blue.

Now being used in just about every lighting situation pertaining to technology, they are most recognized by the two pins that extend from the bottom of the LED.

What is SMD technology?

Surface-mount technology (SMT) is a method for producing electronic circuits in which the components are mounted or placed directly onto the surface of printed circuit boards (PCBs). An electronic device so made is called a surface-mount device (SMD).

SMD’s came about due to devices becoming smaller and the need to be able to have this type of LED fit within the smaller technology. So with that said, the uses for SMDs have rapidly increased in the first decade of the 21st century.

DIP LED screen is one of the old designs of LED if compared with the new technology of SMD. But it is also one of the most durable and stable solution for outdoor led display. SMD led display is an new technology these years and it becomes more and more popular now due to its better picture quality and higher resolution.

Following is a photo showing the DIP and SMD LEDs for your reference. 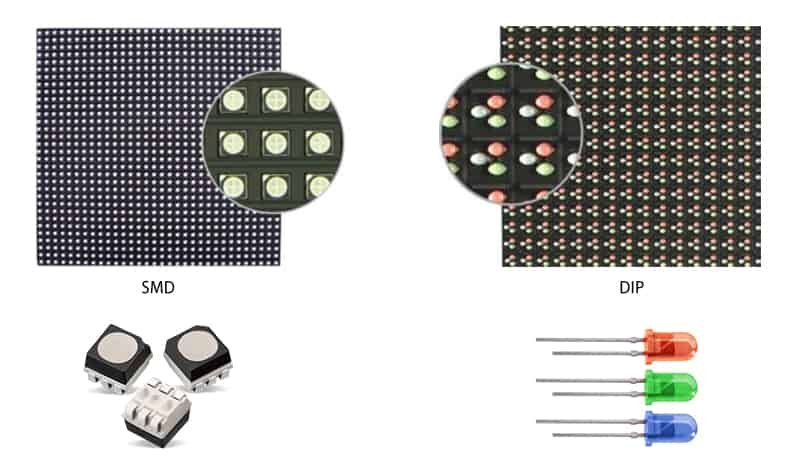 Compared to DIP displays, SMD displays have the following advantages: 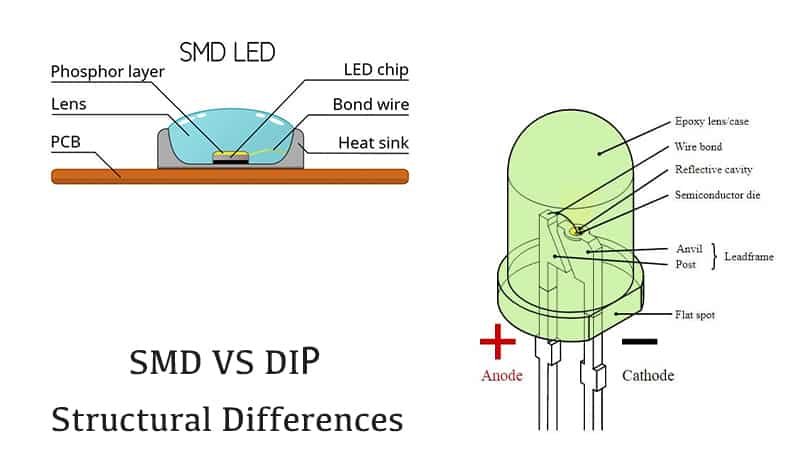 In general that they both have advantages and disadvantages. If your outdoor fixed installation project requires high brightness and more durable application then you may choose DIP LED displays.

If you require higher resolution and wider viewing angle then SMD LED would be a good option. For indoor application, the viewing distance is shorter and usually we seek for the best picture quality and no need very high brightness, so the SMD led screens would always be the best option.