What is the difference between synchronous and asynchronous?

What is an LED-Display control system?

LED display control system is a system that controls and displays videos, animations, pictures, texts, etc. on the LED screen. It is to LED display screen what brain is to man, to control the content of the LED display.

Synchronous control means that the LED display screen will show what the computer shows. The synchronized system is consisted of sending a card, receiving a card and the relevant control software that will be installed in the computer. 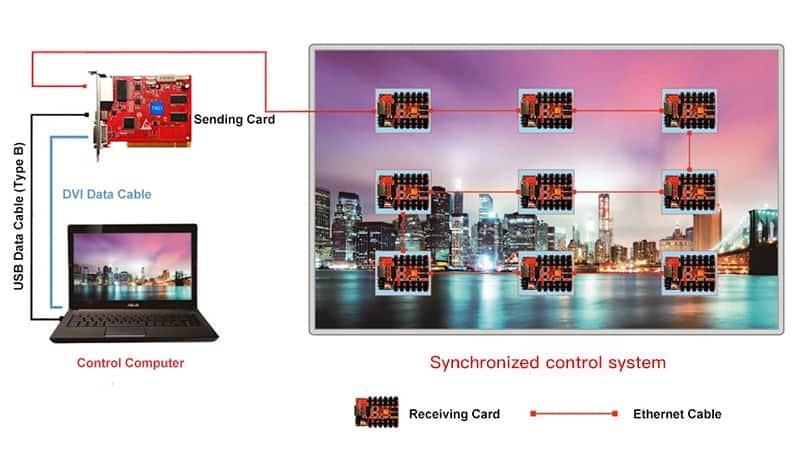 LED display synchronous control system mainly used for real-time display of video, pictures, text, notices and other information, mainly used for indoor or outdoor full-color LED display screen. The led display screen synchronous control system controls the working mode of the display screen, basically the same as the computer display. It maps the image on the computer monitor in real-time at an update rate of at least 60 frames per second. It usually can multi-grayscale color display, which can achieve the effect of multimedia advertising.

Compared with the synchronized control system, the asynchronous control system is just the opposite. It does not need a computer to work with the screens all the time because the sending card which has a memory function. 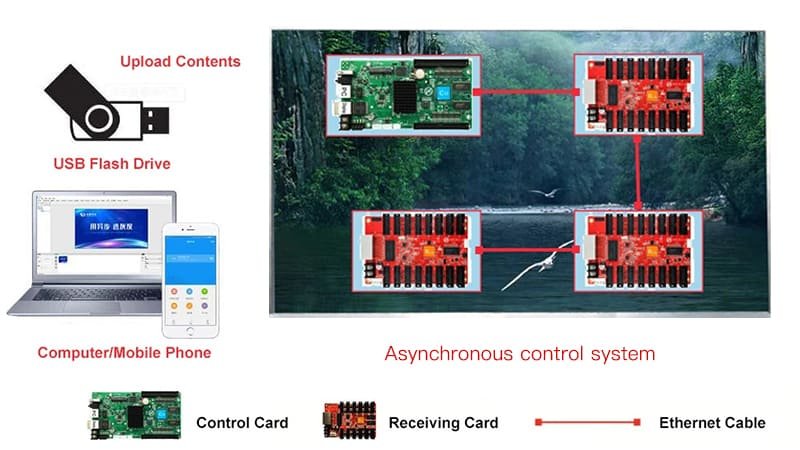 It is characterized by simple operation, low price, and a wide range of use. The biggest feature is that the content of the display screen can be controlled according to the area, and the content is out of sync with the computer monitor.

Therefore, even if the computer is turned off, the LED display can still be displayed, but the broadcast information will be limited because the storage capacity of the control card is within a certain range, which is suitable for places where real-time requirements are not high.

Usually, it will be put in the cabinet and you can send the program to the sending card with computer via ethernet cable, 3G, wifi, SD card, or USB thumb drive.

It will be “uploaded” into the memory of the sending card. After that, the program will be transferred to the receiving card and lastly, the screens will broadcast the program automatically. In most cases, we recommend our customers choose our industrial standard wifi router, to replace the ethernet cable with the wireless signal so that you get the greatest convenience to program the led display.

In most cases, we recommend our customers choose the wifi router ( Within 10 meters ), to replace the ethernet cable with the wireless signal so that you get the greatest convenience to program the led display.

And for the 4G/3G option, there is no distance limit, you could change the content on your screen in any place of the world as long as it has the internet.

Please note that there is the maximum resolution load capacity for asynchronous control way, it must below 23,00,000 pixels.

LED display control system is a significant part of the LED display; quality and service are particularly important.

Now, most customers choose the brands Novastar, Colorlight, Linsn, mainly because they do good products and keep up with the service.